I’m proud to admit that I was an 80’s kid. Most of my childhood occurred during the 1980’s and, damn right, my family owned a set of Jarts! Recently, I couldn’t help but wonder… Can you still buy Jarts? I have fond memories of playing Jarts in our front yard with family and neighborhood friends. It was actually a really fun game when played properly, and responsibly.

But as the saying goes… kids will be kids. And we were kids. And sometimes kids do irresponsible things.

Jarts had just the right handle and were weighted in such a way that you almost had to chuck them straight up into the air just to see what would happen. They would fly up as high as you would throw them, with the point up and fins down… then when they hit their peak – gravity would force the heavier-sided point end down with the fins now up and they would spiral like a rocket down to the ground.

Once you figured out how this worked – the new game with Jarts became seeing who could throw them the highest. You can imagine the danger! Jarts were not very sharp at all – but with increasing downward speed, they would build up enough force that they could do some serious damage to property or even life.

So, can you still buy Jarts?

The sale of the original lawn dart (Jarts) was banned in December of 1988 by the Consumer Product Safety Commission after an aggressive campaign by David Snow, whose daughter was accidentally killed by an errant Jart toss, to stop the sale of Jarts and the marketing of them to children.

So, you can’t exactly purchase the original Jarts with metal tips from stores or even online anymore. But, there is a new safer version of the classic lawn dart game with safer dull tips on the Jarts rather than the dangerous metal tips. 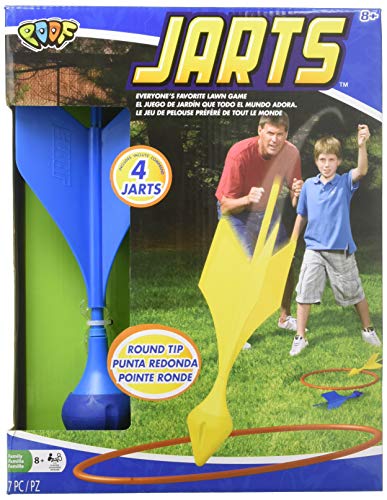 Is it illegal to own Jarts?

Can you buy or sell Jarts on eBay or Craigslist?

No. Both platforms will take down any listing attempting to sell the classic metal-tipped Jarts.

If you grew up in the era when Jarts was a popular yard game, like I did, and you want to relive those nostalgic days… maybe the newer safer version of Jarts just aren’t doing it for you. I get it. Without the danger, they’re just not the same.

But check this out! I found this metal wall sign that seems to recreate a 1969 advertisement for the then-popular game of Jarts. 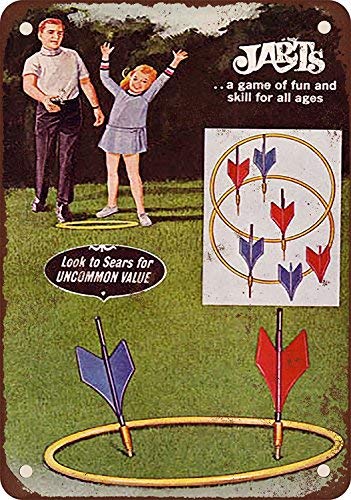 For me – I’m content with the nostalgic memories and also grateful that nobody I know got seriously injured by Jarts when we were kids in the 80’s. I’m sure the new safer version is almost just as fun as the original. Personally – I prefer to spend my outdoor leisure time on a disc golf course these days. But I might buy the nostalgic Jarts wall hanging to put up in my basement gameroom or something!