a political and economic theory of social organization which advocates that the means of production, distribution, and exchange should be owned or regulated by the community as a whole.

The Benefits of Socialism

You cannot define the benefits of an ideology like socialism without stating who actually benefits. There are 2 main groups that benefit from socialism; political leaders (elites) and low-class citizens (sometimes referred to as the welfare class).

The political elites benefit from socialism because they gain control. The government gets to set and regulate the rules in a socialistic system – so, the people who run the government stand to benefit the most. It’s not hard to see how they benefit… just follow the money. It won’t take long to discover how politicians are able to enrich themselves when they are in control.

This is how the political elites benefit from socialism – they get power, control, and riches.

Not meant in a demeaning or derogatory way… but the fact is that there is a lower class of citizens. Generally speaking, low-class citizens are people who earn less money and/or own fewer assets. People in this group typically are unwilling or unable to gain employment or find another means to earning money. Low-class citizens usually qualify for government handout programs, like; welfare, food stamps, housing assistance, free healthcare, and other benefits.

This is how the welfare class benefits from socialism – they get all kinds of ‘free’ stuff from the government.

The Drawbacks of Socialism

While it seems well-intentioned, the socialistic philosophy actually has some major pitfalls and drawbacks. Think of them as unintended consequences. The framers of a socialistic society think that they are doing good by helping the poor and downtrodden. But at what cost…?

“Socialism destroys the individual will to succeed.” ~ Matthew Allen

Socialism is the culmination of collectivism, which is the practice or principle of giving a group priority over each individual in it.

Think about it in a simplified hypothetical version of society. Everybody works to produce goods and services for the survival of the entire group – but nobody profits individually. Instead, ALL profits are turned over to the government, who then redistributes the profits to each individual equally. Everybody is working at varying levels and everybody gets the exact same payout.

Seems fair, right? Sounds like the perfect utopia. Except for the fact that it doesn’t work. Once people figure out that they don’t have to work as hard (or work at all) and they will still receive the same payout – they will stop working so hard (or will stop working altogether). The people who wish to continue working hard become infuriated and annoyed with those who refuse to work so hard. People are pitted against one another based on their willingness or ability to work and produce for the good of society.

This is one major reason that socialism never works, and never will. People figure out that they can abuse the system and they take full advantage.

What is the best alternative to socialism?

The free-market economy, otherwise known as capitalism, is easily the best alternative to socialism. It has been proven to work, as evidenced by the rise of the United States of America and its long-standing ability to survive and thrive. The United States was built on free-market principles and has led the world in innovation over the past two centuries.

The free-market economy features the principle of individualism, which is a social theory favoring freedom of action for individuals over collective or state control.

In a capitalistic free-market economy, individuals are greatly rewarded for their hard work, innovation, ideas, and choices. There is a wonderful incentive to achieve and prosper when you know that your own hard work or innovation will reward you personally.

In a socialistic society – this incentive is stripped away because the rewards that should be justly yours are instead stolen (through legal taxation) to benefit society as a whole.

What about those who are truly in need who cannot support themselves?

People who support socialism always highlight the ‘safety net’ that they think is needed for people who are truly unable to produce an income to support themselves. What would happen to people like this if there were no ‘safety net’ provided by the government?

In a free-market system, a solution always emerges. America didn’t always have government-funded welfare programs. How did less fortunate people survive in those days? I will tell you how. Through private charitable organizations, many of which had connections to the church. These organizations still exist today – and they would rise up and flourish if government welfare programs were to suddenly disappear.

The bottom line is this…

Capitalism leads to prosperity and prosperity leads to generosity and generosity is what takes care of the poor and downtrodden. Socialism is nothing more than a good way to let bad people make bad decisions with your money! Do yourself a favor and study both philosophies some more. If you have any sense at all – it will become clear that socialism leads to destruction and capitalism is the way to abundance. 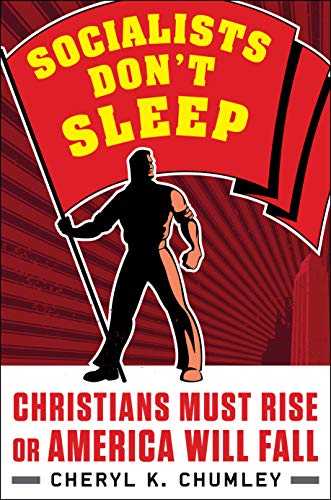 Socialists Don’t Sleep: Christians Must Rise or America Will Fall
Buy on Amazon

This site uses Akismet to reduce spam. Learn how your comment data is processed.