This is a follow-up post to an ‘epic’ blog post that I contributed to over at the Don’t Quit Your Day Job blog. If you haven’t read it yet, check out “Should You Get a Degree or Drive a Truck?” In this post, I created a hypothetical example where I prove that driving a truck actually beats out financing a degree in the long run! And not by just a little – by nearly $1 million!

In the original post on the DQYDJ blog, specific numbers were analyzed regarding incomes based on real data provided by the Census Bureau. Numbers do not lie and, not surprisingly, the findings in the data prove that the average college graduate earns more than the average truck driver. Some of the factors that contribute to those numbers were discussed in the post, as well as in the comments section.

There is one factor though that was not discussed that I would like to address here. It is one that I thought of right away and was also brought up by a commenter. What about the cost of a college education? Is it better to take out student loans and finance a degree or would it be better to just drive a truck for a living? It is fairly inexpensive to obtain a CDL and in many cases trucking companies will pay for your training if you agree to work for them for a year or two. College, on the other hand, is pretty expensive and time consuming. Some students are able to attend college without piling up debt, either through scholarships, hard work, or the benefit of having parents who are able to pay. Others, though, choose to take out student loans to fund much of their college education. Two-thirds (65.6%) of 4-year undergraduate students graduated with a Bachelor’s degree and some debt in 2007-08, and the average student loan debt among graduating seniors was $23,186 (excluding PLUS Loans but including Stafford, Perkins, state, college and private loans).*1

This statistic, as well as others were provided to me by PKamp3 over at DQYDJ.net. I am going to use some of these numbers along with my own assumptions to create a hypothetical situation regarding driving a truck vs. getting a degree. In my example, I am going to use averages found in this data. This obviously will not reflect all real-life situations as the assumptions that I plug in are a matter of life choices by individuals. Eric had a goal of getting his student loans paid off by age 30, so he put them on an 8-year payoff plan. At a 6% interest rate, his payments were $305 per month*4 (or $3,660 per year). This loan payment represents about 8% of his gross income. Eric decides to hold off on any retirement savings until his student loans are paid in full. 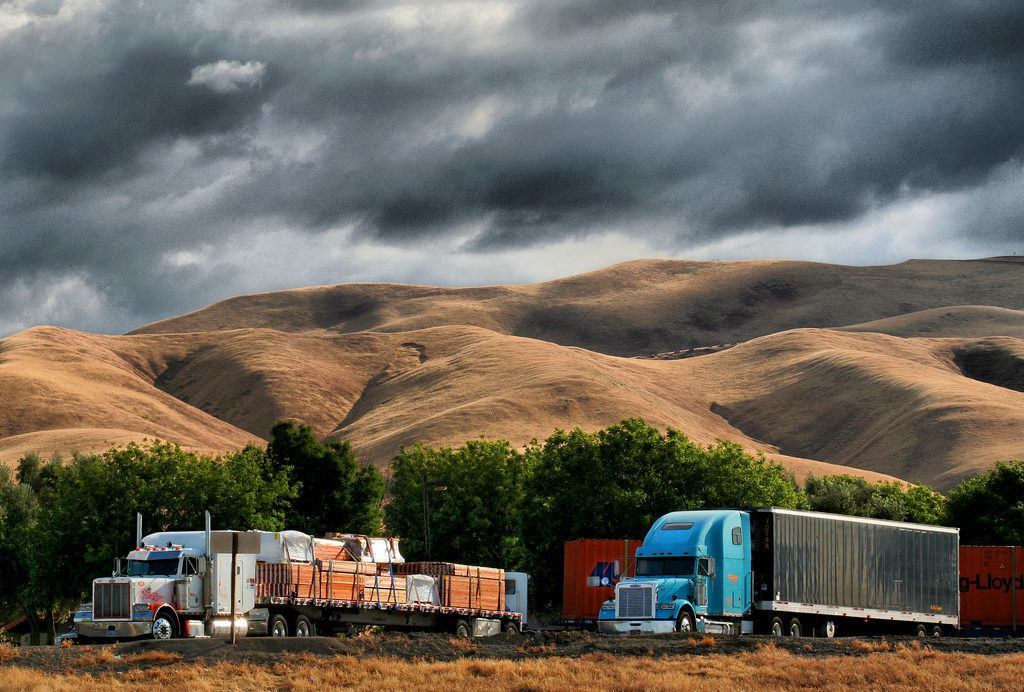 Matt decides not to go to college after high school and instead goes to work in a factory. After a few years he decides that he wants to be a truck driver. By age 22, he obtains his CDL without incurring any debt. He is able to find a trucking job right away making an annual salary of $31,688.*5

Since Matt does not have any debt and he understands the power of compound interest, he decides to start his retirement savings at age 22. For purposes of comparison, we will assume that he invests 8% of his gross income (the same percentage to income ratio as Eric’s student loan payments). Matt invests $2,535 per year until age 30. Assuming a 12% average annual rate of return, Matt builds up $34,921 in his retirement savings.

Getting Raises and Investing

Eric is now 30 years old and earns $57,400 per year, almost $20,000 more than his truck driving counterpart, Matt. Both decide to kick up their retirement savings to 10%. Eric currently has zero saved for retirement, but is contributing $5,740 per year. Matt is adding $3,778 per year to the balance he has already built up while Eric was paying off his student loans. With the same 12% rate of return assumption, the numbers are astounding!

At age 65, truck driver Matt has amassed a retirement savings of $3,670,339.65! Degree holder Eric’s savings only add up to $2,775,078.22. By not going into debt and harnessing the power of compound interest, Matt ends up with almost one million dollars more than his degree holding counterpart, Eric!

Investment calculator provided via Dave Ramsey’s website.  A very good one, by the way!

Here is another look at the numbers in table form:

My hypothetical example and assumptions may be slightly biased because I am a truck driver and because this is my blog! I just write what I know, and I know that I have been saving for retirement since my early 20’s. However, I would like to provide you with information and opinions from a degree holders perspective. Here is PKamp3’s interpretation and analysis of my example:

As you can see from the example of (fake) Matt, the most important factor for many of these calculations is actually the age that you start investing for retirement. If Eric the degree holder stumbled his way into college with no plans while Matt knew he was going to start plugging away at his retirement… Matt would retire with more funds even if he earned less than a 12% return (which strikes me as a high return).

Another factor Matt didn’t discuss was the difference between in-state and out-of-state trucking. As an Engineer, I’m not sure what the job prospects are for in-state truckers, but in my original article Matt mentioned that the age requirement is only 18 years old – giving the hypothetical Matt (as opposed to the author Matt) 3-4 years extra to invest that Eric would never get back.  It’s all about the compounding – a moderate savings amount can beat a high savings amount if the moderate savings amount occurs earlier in a career.

Next, let’s talk motivation! Eric came out of school with a degree and a student loan payment, while Matt was free from the burdens of a loan payment. It can be psychologically hard to both invest and pay down a loan at the same time, but the delta between the salaries of Eric and Matt was $17,920. Some of that would go to the loan payment, and some would go to taxes.  But if he saved some of it – he could surpass or beat the savings of (hypothetical) Matt.

It all boils down to perspective. If Eric graduates and tries to keep up with a certain lifestyle while Matt gets a jump on the retirement savings, Matt will out-save his buddy Eric. If Eric can avoid the spending temptations (and save some of his salary) while paying down his loans? His savings will be higher.

And a final point – 67% of graduates with a Bachelor’s Degrees graduate with loans. Like Matt said, the average student loan balance is $23,186. There are plenty of students graduating with higher loan balances and degrees that earn less money over the course of a career. Consider this – a student with $100,000 in loans at 6% would pay $1,110.21 a month (for a ten year payoff)! After taxes, the average truck driver is better off – and depending on the state, even much better off. $100,000 seems huge – but it’s not impossible at a private school – or even some public schools.

I fall on the degree side – but I know (from my personal experience) that even with a greater than average loan balance I was able to save for retirement at the same time.  Again… it all boils down to a combination of cost and major. If you choose a less lucrative major and you take out a massive amount of loans? 10 times out of 10 you should have gone down a different road. And yes, that pun was intended.

So readers, what do you think? Would it be better to make less as a trucker but end up with more, or make more with a degree (and student loans) and end up with less?

1 thought on “Driving a Truck vs. Financing a Degree”